This week’s star ingredient is the mighty maple syrup.

Real maple syrup has a flavor all its own that science has yet to completely understand.  For many of us it is the flavor of home, bringing to mind warm memories of lazy weekend mornings with our families.  British culinary expert Delia Smith described maple syrup as “a unique ingredient, smooth and silky textured, with a sweet, distinctive flavour – hints of caramel with overtones of toffee will not do – and a rare colour, amber set alight. Maple flavour is, well, maple flavour, uniquely different from any other.” 1

Maple syrup is made from the sap of maple trees.  In cold climates, maple trees store starch in their trunks and roots before the winter.  In the spring the starch is converted to sugar that rises in the sap. Maple trees are tapped by boring holes into their trunks and collecting the exuded sap. The sap is heated to evaporate most of the water, leaving the concentrated syrup.  A shelter built for that purpose is called a “sugar shack.”  Forty to fifty gallons of sap are required to make just one gallon of precious syrup.

Aboriginal peoples living in the northeastern part of North America were the first groups known to produce maple syrup and maple sugar.  These tribes developed rituals around maple syrup making, such as celebrating the Sugar Moon (the first full moon of spring) with a Maple Dance.

The practice of maple syrup and maple sugar making was adopted by European settlers.  During the 17th and 18th centuries, cane sugar had to be imported from the West Indies.  Thus, locally-made maple sugar and syrup gained popularity.

Abolitionists used maple syrup and maple sugar before and during the American Civil War, because most cane sugar and molasses were produced by Southern slaves.

Because of food rationing during the Second World War, people in the northeastern United States were encouraged to stretch their sugar rations by sweetening foods with maple syrup and maple sugar, and recipe books were printed to help housewives employ this alternative sweetener. 2

Today, maple syrup operations or “sugar shacks” are open from mid-March to mid-April, which is considered Maple Fest time.  Quebec, Canada and Vermont are the world’s largest maple syrup producers.  Visitors can take sleigh rides out into the woods to see the trees tapped and the sap collected, and tour “sugar shacks.”

Children often make maple taffy by pouring a stream of boiled maple syrup onto fresh snow where it hardens. 3, 4, 5

Maple syrup is graded according to its density and translucency.  In the United States,  maple syrup is divided into two grades: Grade A and Grade B. Grade A typically has a milder flavor than Grade B, which is very dark and rich.

In the United States, a syrup must be made almost entirely from maple sap to be labeled as “maple.”  It consists primarily of sucrose and water, with small amounts of fructose and glucose.  It also contains some potassium, calcium, zinc and manganese.  6

This week’s recipe is “Pig in a Blanket” with Maple Caramel Sauce.  The smoky plant-based sausage, rolled inside a fluffy pancake, dipped in warm maple syrup is a classic finger food favorite.  The maple caramel sauce is a luxurious variation of traditional maple syrup.  Its flavor is brightened by a pinch of salt, and gentle simmering.  Serve dish with fresh fruit for a complete breakfast. Water can be substituted for plant-milk.

Making pancake mix is easy, and allows for customization with one’s favorite whole grain flour.  My favorite grain to use is khorasan, which gives pancakes a fluffy texture, and nutty flavor.  Whole wheat pastry flour also works well and is widely available in bulk at health food stores.  This week’s pancake recipe is an adaptation of Alton Brown‘s “Instant Pancake” recipe.

Hints for Whole Grains: When adapting recipes for whole grains, use 4/5ths of the amount of white flour called for.  This accounts for the increased liquid absorption into the bran.  Using an equal amount can result in a tough, dense baked good.  When used in the correct proportions, whole grain flours can produce fluffy baked goods with a delicious “nutty” flavor.

Hints for Fluffy Pancakes: Use fresh baking soda and powder, whip aquafaba, preheat pan, once flipping pancake cook just until set, do not press on pancake with spatula, and serve immediately.

Listen to some sugar shack music while cookin’ up breakfast!

Sugar Shack by Jimmy Gilmer and the Fireballs 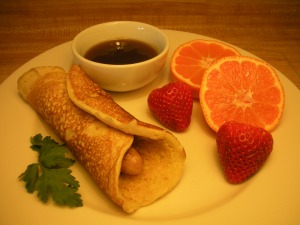 “Pig in a Blanket” with Maple Syrup 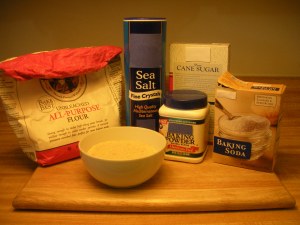 “Pig in a Blanket” Ingredients:

Optional: Side of fruit

Combine the flour, baking soda, baking powder, salt and sugar well.  Measure 1/3 cup + 1 Tablespoon of whole grain pancake mix, for use in pancake recipe.  Store remaining mix for future use in an airtight container in the refrigerator.  Use mix within 3 months.

“Pig in a Blanket” with Maple Caramel Sauce Directions:

Whisk together the aquafaba and the plant-milk + vinegar in a small bowl.

Whisk the Pancake Mix into liquid ingredients, just enough to bring it together. Don’t try to work all the lumps out.

Meanwhile, simmer maple syrup and salt in a small pot on medium-low heat.

Heat syrup at a foamy boil for 1 minute, until thickened slightly.  Pour into dipping bowls.  Set on serving plates with optional fruit.

Cook plant-based sausages in one pan until browned and cooked through.

After plant-based sausages begin cooking, cook 2 pancakes in other pan(s)/griddle.  When bubbles begin to set around the edges of the pancakes and the pan/griddle-side of the cakes are golden, gently flip the pancakes. Continue to cook just until the pancakes are set, to maximize moistness and lightness. 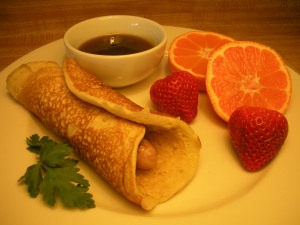