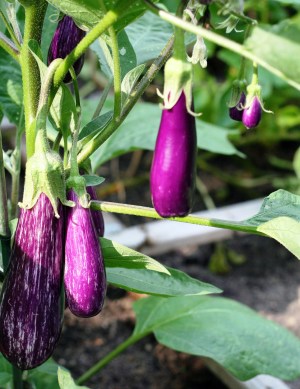 This Summer’s Featured Food is Eggplant.

Eggplant (Solanum melongena) or aubergine is a species of nightshade.

It is a relative of tomatoes, potatoes and peppers.

Eggplants grown in the Americas and Europe are most commonly a purple color, but they can also be white, black, pink, green, yellow, orange and striped.

Eggplants also come in many shapes and sizes.  Those commonly grown in the US resemble purple ostrich eggs.  The name “eggplant” was inspired by small white egg-shaped varieties, cultivated in Europe in the 18th century.   Some are shaped like ping pong balls, others are long, thin and curved.  1, 2, 3, 4

Eggplant is believed to have been first cultivated in what is now Vietnam over 2,500 years ago by the skilled bronze casters, the Dong Son people.  From there its cultivation expanded outward throughout the world.  5

Early on in this expansion, during the Middle Ages, eggplant became known as the “crazy apple.”  It was associated not only with madness, but also poisoning, fevers, melancholy, cancer, leprosy and freckles.

Regions with documentation of perceived eggplant-related insanity include India, Italy and Egypt.  This association has been attributed to linguistics (the word for eggplant resembling the word for insanity), its bitter flavor and spongy texture when raw, and its relation to the actually poisonous, deadly nightshade.

One source relates that even today, if somebody contradicts himself in Egypt, his listener is likely to say “Adi zaman il-bitingan” — “Uh-oh, it’s eggplant season.”

Ultimately the eggplant triumphed.  Its popularity with royalty helped elevate its status in the public eye.

Tenth-century Arab poet Kushajam wrote, “The doctor makes ignorant fun of me for loving eggplant, but I will not renounce it. / Eggplant has a flavor like the saliva generously exchanged in kissing. / No one loathes it but a fool, and none but the cultured love it.”

Soon, the eggplant was on its way to becoming the “king of vegetables.”  The remainder of the Middle Ages yielded a plethora of new eggplant recipes.

Eggplant’s white flesh can easily absorb flavorful sauces and fats.  In the Middle East people are said to joke about a person’s wealth in terms of his or her ability to purchase enough olive oil to cook eggplant.

Eggplant has a meaty texture when cooked, and it is sometimes used as a meat substitute in vegetarian dishes.

Today, eggplant is used in the cuisine of many countries.  Eggplant is widely used in Indian stews, chutneys and pickles.  Stews such as French ratatouille and Greek/Turkish moussaka feature eggplant.  Its slices can also be battered, and served with various toppings.  In Italy, the eggplant slices are layered with tomato sauce.  In Spain, they are garnished with syrup.  Eggplant may also be roasted in its skin and blended with lemon, tahini, and garlic, as in Arab baba ghanoush.  The most unusual preparation of eggplant may be the sweet candied Greek specialty gliko melitzanis.  6

Eggplant is a source of manganese, and the antioxidants chlorogenic acid and purple anthocyanins.  7, 8

Watch a video about growing eggplant:

Watch a clip – Can you find the eggplant?:

This Summer’s Featured Recipe is Miso Eggplant.  Known as nasu no dengaku, this dish is a favorite summer food in Japan, when eggplants are harvested.  Our recipe calls for sauteing the eggplants, but they can also be grilled until crispy, or steamed.  Miso is the main flavoring component in the miso sauce.  White miso has a mild sweet flavor, while red miso has a strong umami flavor.  The sauce can be made several days ahead and refrigerated if desired.

1.Whisk miso, sugar, sake and vinegar in saucepan until smooth.  Simmer over low heat, stirring frequently, until sugar dissolves and color begins to darken, about 30 minutes.  Remove from heat. 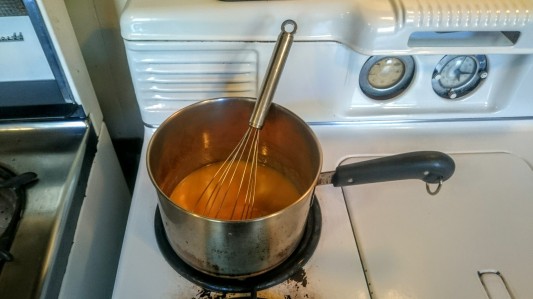 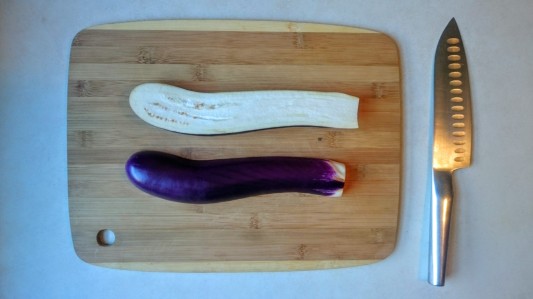 3.  Score flesh in a crosshatch pattern.

4. Brown both sides of the eggplant in a skillet over low medium heat. 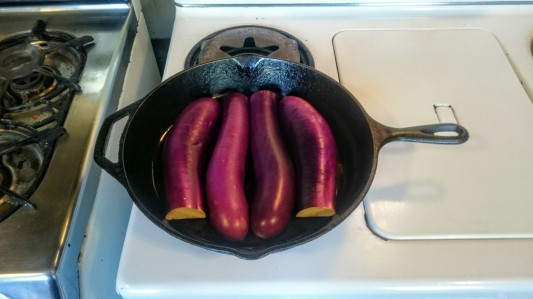 5.  Add a few tablespoons of water to the pan, turn heat to high, and cover for 1 minute. 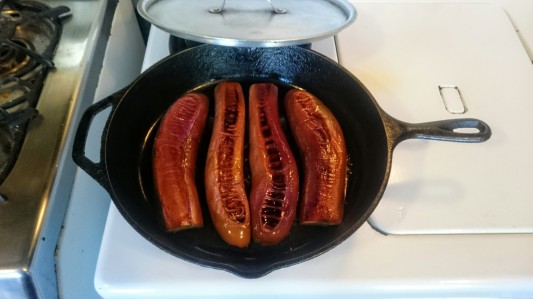 6.  Remove eggplant from pan, and place on baking sheet, skin side down.  Cover eggplant flesh with miso sauce.

7.  Broil until miso begins to darken and caramelize, about 30 seconds to 5 minutes.

5. Slice eggplants into thirds, arrange on serving plate, and garnish with sesame seeds.

1.  “Traditional Crop of the Month:  African Garden Eggplant.”  Food and Agriculture Association of the United Nations, 2016.