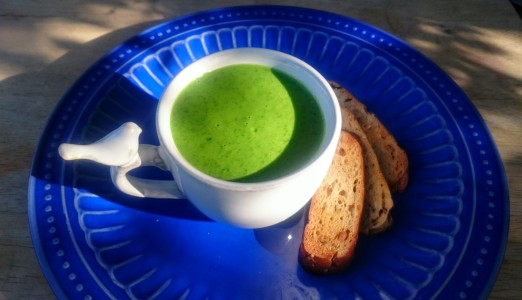 This year, the Fun Food Feed will be featuring Fresh Herbs.  Herbs are rich in flavor and nutrients, and can easily grow in a sunny kitchen window or garden. 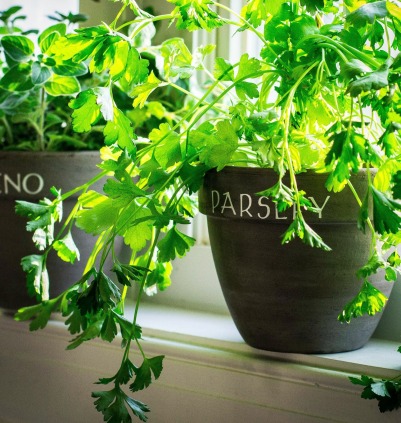 Parsley is thought to have originated in the Mediterranean (Italy, Greece, Algeria and Tunisia).

Historical records indicate parsley was introduced into England from Sardinia, Italy in the 1500s.  European colonists brought parsley to the United States in the 1600s, and it continues to be a popular garden vegetable nationwide.

In ancient Greek mythology, parsley was dedicated to Persephone, goddess of the afterlife. Folk legend explains parsley’s slow germination with the myth that parsley must first visit the underworld seven times before it may freely germinate and flourish on the earth. The herb was sprinkled on corpses to cover their smell, and planted on the graves of loved ones.

It was also believed that parsley only flourishes in gardens where a strong woman presides over the household.

One Greek myth tells the story of seven chieftain heroes on an expedition stopping at the village Nemea for water.  The infant prince’s nurse left him alone in a meadow, to lead the seven heroes to a well.  They returned to find the prince dead, lying on a bed of parsley, killed by a dragon.  The heroes slayed the dragon and buried the prince.  One of the heroes saw the prince’s death as an omen boding destruction of the seven heroes.  From that day forward, the heroes called the dead infant prince Archemorus, meaning the “forerunner of death.”  They founded the Nemean Games sports festival in honor of him, held at the sanctuary of Zeus beginning ~500 BC.

According to Greek scholars, the Nemean Games‘ crown of victory was made of parsley.  The judges wore black robes, interpreted as a sign of mourning.  Events included horse racing, running in armor, wrestling, chariot racing, discus, boxing, spear throwing, archery and musical contests.  Women were permitted to compete in the horse races, as it was not they who would be considered the victor, but the male owner of the horse they rode.  Parsley was fed to the horses.

The Nemean Games were revived in 1994, after over 20 years of archaelogical excavation at Nemea.  The contemporary games are organized according to age and gender, and open to international participation.

In the Middle Ages parsley was credited with lethal powers. It was said that one could bring certain death to an adversary by pulling a parsley root from the earth while calling out the enemy’s name.

Nicolas Culpeper, the seventeenth-century English herbalist and astrologer, placed parsley under the dominion of the planet Mercury.  Mercury is a guide of souls to the afterlife.  Mercury is also a god of commerce, communication and travel.  6

Parsley may be best known in cuisine for its use as a colorful garnish.  As a fresh herb, its powerful flavor is used in moderation, but parsley is far more than just a decoration.  It is a common ingredient in soups, sauces and salads in Europe, Asia and Latin America.

In traditional European cooking, parsley is bundled with other flavorful herbs, like rosemary and thyme, into a bouquet garni, and simmered in soups and sauces.

Parsley is the main ingredient is fresh raw sauces, used in traditional Italian, Argentine, Brazilian and Uruguayan cuisine.  Parsley, oil, garlic or onion, citrus or vinegar, and other seasonings are blended together, and served as a bright green condiment with entrees.

Parsley is a dark leafy green vegetable, and as such is rich in a wide variety of vitamins, minerals and the phytonutrients flavonoids.  It is high in folate, vitamin K, vitamin C, vitamin A and iron.  7 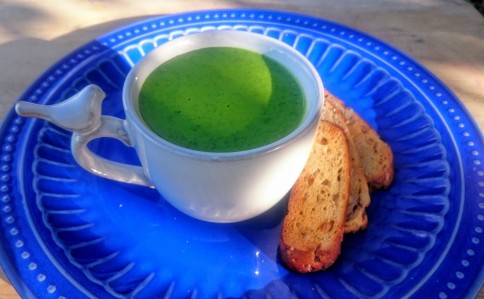 This Winter’s Recipe is for Parsley Potato Soup.  On chilly wintry evenings, this soup brought together three generations of my family, around the table of my grandmother’s home.  The creaminess of the potato and cashew based soup is balanced by the bright fresh flavor of the parsley.  Dip fresh bread into the soup for a hearty meal. 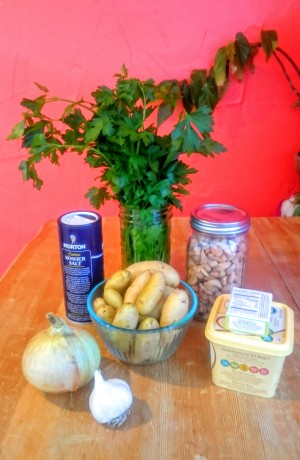 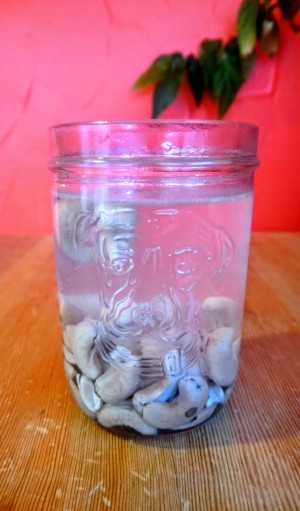 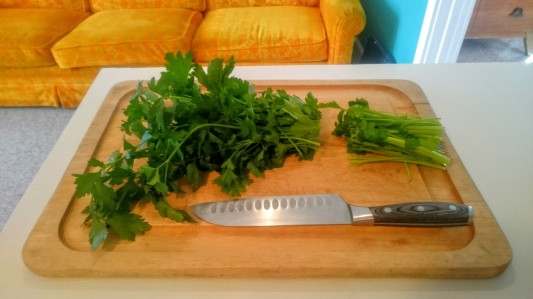 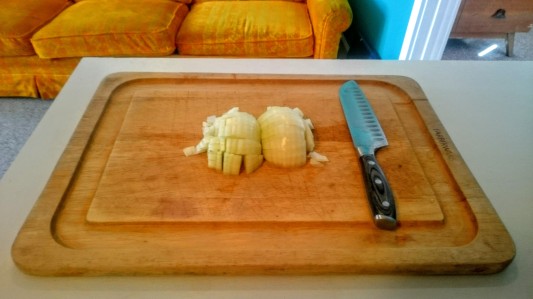 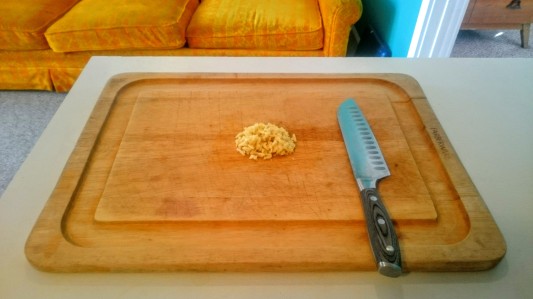 5.  Dry saute onions, on low heat with lid, until translucent and soft.  When a glaze begins to form on the bottom of the pan, deglaze with a few drops of water, stirring the onions vigorously. 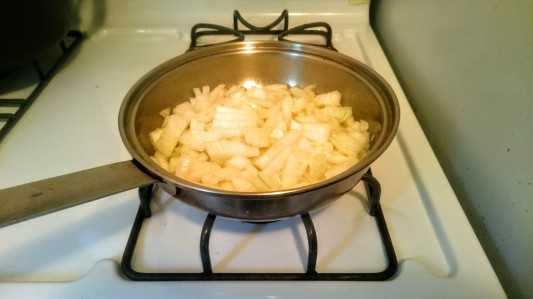 6.  Stir in garlic and continue to saute, on low heat with lid, until garlic translucent. 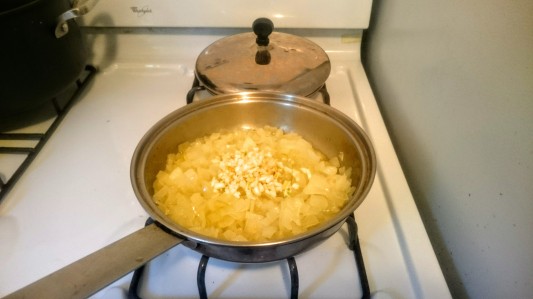 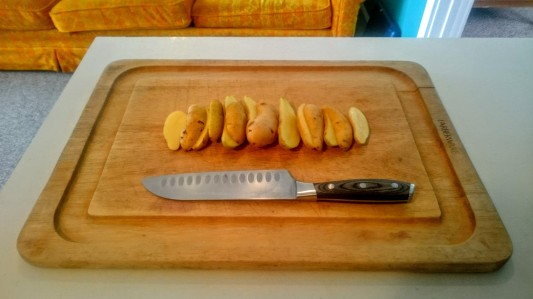 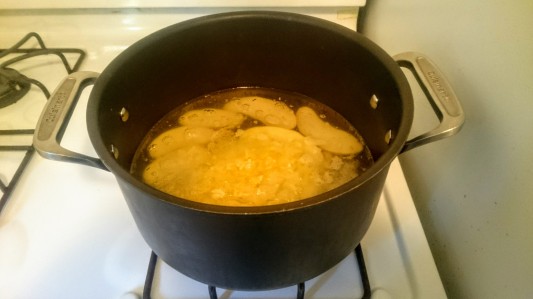 9.  Blend soup base, cashews and parsley until smooth, holding lid on blender with towel for safety.  Season with salt and pepper to taste.  (Optional: Pour soup through strainer for extra smooth texture.) 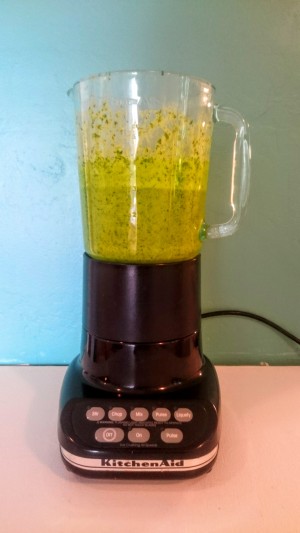 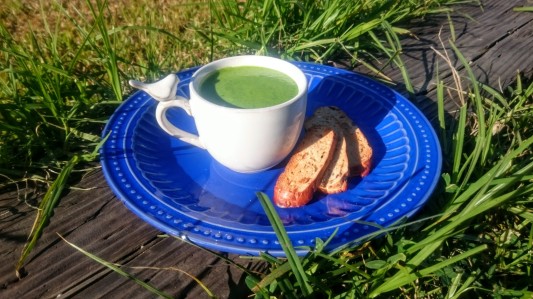