This Summer’s Featured Herb is Rosemary.

Rosemary belongs to the family Lamiaceae (aka the mint family), to which basil, lavender, thyme, marjoram, oregano, mint and catnip also belong.

The botanical name for rosemary is Rosmarinus officinalis.  Rosmarinum is the genus, and  officinalis the species.  Rosemary’s botanical name is believed to derive from the latin words row meaning “dew,” and marinus meaning “sea.”  This translates to “dew of the sea,” likely due to its heartiness in sandy soil and salty sea air. 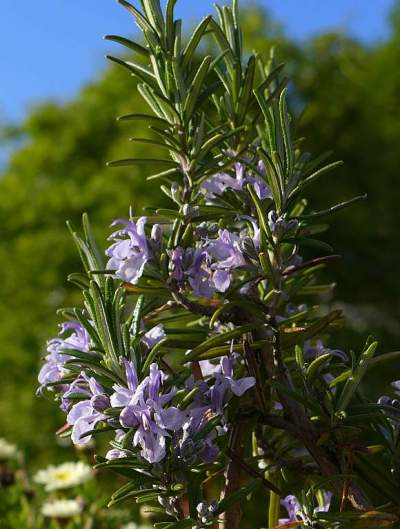 Rosemary is a woody, perennial herb with fragrant, evergreen, needle-like leaves and white, pink, blue, or purple, flowers.  Its leaves are available fresh all year long.  It is drought and pest-resistant, and is considered easy to grow.

It is native to the Mediterranean, and grows wild throughout these regions.  It has since spread to many areas all over the world.

Rosemary has long been considered a sacred plant to many cultures, including ancient Egyptian, Greek and Roman.

A myth tells of the Virgin Mary stopping to rest when fleeing to Egypt, and spreading her blue cloak over a rosemary bush with white flowers.  When she removed her cloak, the flowers had turned blue.  The plant then became known as the “Rose of Mary.”

An old saying goes “where rosemary flourishes, the woman rules.”  Some believed that rosemary could not grow in the garden of the home unless the mistress was the master.

Rosemary has also come to symbolize love and fidelity, and in the Middle Ages was worn in wedding ceremonies.  It can also symbolize remembrance, and is worn and placed on graves at funerals and war commemorations.  1

Traditional Mediterranean cuisines often use aromatic fresh or dried rosemary.  Whole sprigs can be used to season soups, stews and teas.  Chopped fresh or crushed dried rosemary can be sprinkled onto roasted vegetables and meats, into breads, stuffings and sauces.  Desserts with fruit and shortbreads can be heightened with a light addition of the herb.  2

Rosemary is a source of a number of phytochemicals, including rosmarinic acid, camphor, caffeic acid, ursolic acid, betulinic acid, carnosic acid and carnosol.  Research indicates rosemary may have anti-microbial, anti-oxidant, and anti-cancer properties.  3

This Summer’s Featured Recipe is for Rosemary Bread.  This slow-rise, no-knead bread recipe was recently shared with me by my dear friend, Frank.  It’s based on artisan bread-maker Jim Lahey’s iconic recipe, originally published in the New York Times.  The bread rises overnight (or while you’re away at work), and is baked in a pyrex dutch oven for a crispy crust and moist airy interior.  We used a whole grain blend of our favorite flours (stone-ground whole wheat, corn, and AP) for a nutty flavor, and added fresh rosemary from the garden.  4, 5

Slice the rosemary bread for sandwiches, or tear at it like wild beasts and dip it into sauces and spreads.  Perfect for a picnic, in the shade of evergreens.  Or with some vegetable soup, sitting under the stars.

Our bread is served with a sun-dried tomato white bean hummus and topped with walnuts, olives, white beans and fresh chopped rosemary. 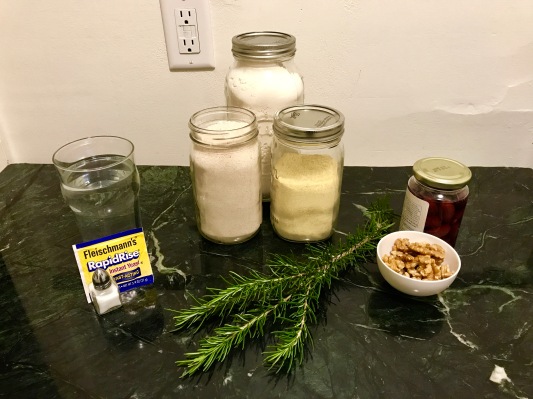 1.Mix ingredients together in bowl.  Add more water if needed until wet and sticky (too moist to be kneaded).

2. Cover bowl and let rest 12 to 18 hours until dough is bubbly and risen.

3. Lightly flour counter top and place dough onto it.  Lightly flour dough.  Shape into a ball by pulling out edges of dough and then drawing them to the center. 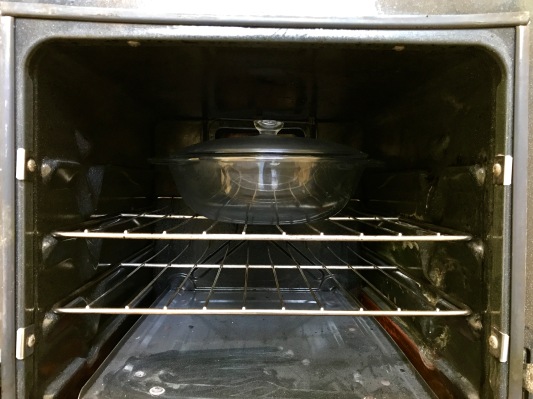 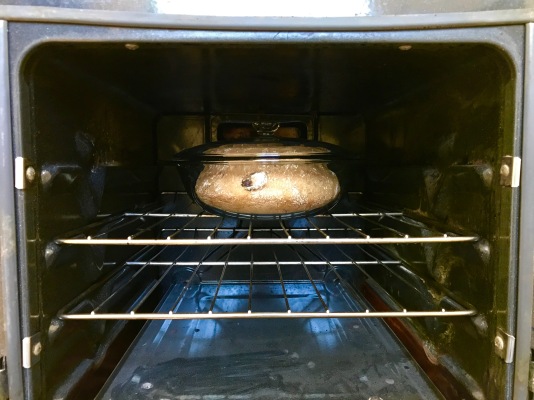 8. Carefully remove hot lid and bake another 15-30 minutes to brown. 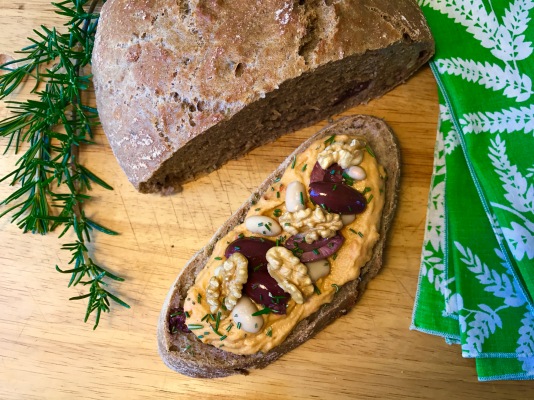