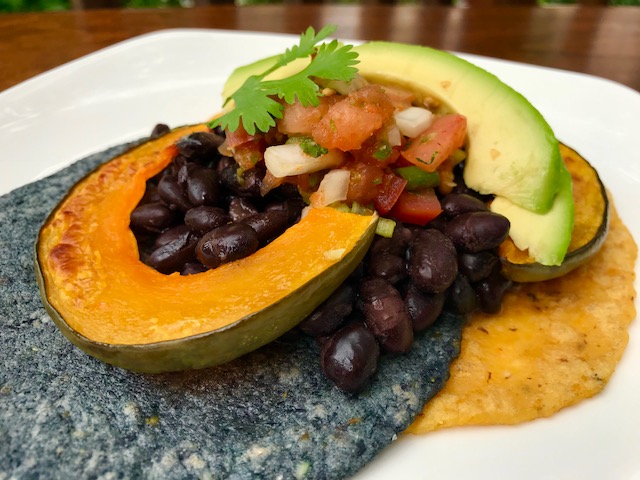 This year, the Fun Food Feed is featuring longevity Blue Zones (BZ) from around the world, and dishes inspired by them.

A Blue Zone is a “small, homogenous geographical area where the population shares the same lifestyle and environment and its exceptional longevity has been scientifically proven.”

Nine shared lifestyle habits were found in all five populations:

These populations with a high proportion of centenarians have not lasted indefinitely, depending on the above factors being maintained.

The Nicoya Peninsula is said to be named after the last ruler of the Mangue people (also known as the Chorotega), dominant in the region before the Spanish conquistadors arrived in Costa Rica in the 1500s.  The Mangue are said to have been courageous warriers, who fought hard against invaders, but even they were all but decimated by the Europeans’ disease and slavery.

Oral historians describe the Mangue as a semi-democratic society, in which chiefs were elected.  Towns were built around a central plaza, surrounded by markets.  Cacao beans served as currency.  Homes were rectangular structures built of wood with straw roofs.  A pantheon of gods were worshiped in specially constructed temples, and in religious festivals.  Most of Mangue’s people were corn farmers, as well as specialists such as potters, astronomers and mathematicians.

Corn was central to the Mangue culture, expressed in agriculture, diet, customs, artwork and religion.  Corn has remained a primary staple in the Nicoyan diet, distinguishing it from the rest of Costa Rica, in which white rice has now eclipsed squash and rivals corn.

Centenarian families of the Nicoyan Peninsula of Costa Rica tend to have a garden, surrounded by forest, in which they grow and gather most of their food.

Since ~5000 BC, Mesoamericans have been cultivating the Three Sisters, beans, squash and corn, together.  First the corn is planted, and begins to sprout upward.  Next, beans are planted, and are supported by the corn’s stalk.  Beans draw nourishing nitrogen from the air into the soil.  Their vines hold the three sisters together.  The large prickly leaves of the sprawling squash conserve water, prevent weeds by shading the soil and discouraging pests.

The ears of corn are dried and harvested.  Each day’s fresh tortillas can then be made by soaking its whole kernels overnight in calcium hydroxide lime and water, grinding them into masa, and cooking the tortillas over the fire.  Research indicates soaking infuses the grain with over seven times more calcium, and liberates proteins and niacin otherwise inaccessible.

These tortillas were traditionally topped with a generous spoonful of sisters black beans and squash from a simmering pot, and garnished with avocado and cilantro.

The Three Sisters together provide balanced sustenance, rich in calcium, niacin, vitamin A, anthocyanins, protein and complex carbohydrates including fiber.

Nicoyan centenarian communities are often centers of social activity and support.  Centenarians households are often multi-generational, with parents, children and grand children living together.  Neighbors frequently visit each other, sharing stories and laughter, and helping each other with chores.  This can help provide a sense of purpose and belonging.

Research indicates that Blue Zone centenarians share the characteristic of resilience.  While their lives aren’t without hardship, they appreciate what they have, and find joy in their day-to-day lives.  Living without many “modern conveniences,” this often includes physical chores around the home, and out of doors in vitamin D producing sunshine.  Transportation is often on foot or by bicycle.  These practices are believed to enable them to remain relatively free of stress.

In his book, The Blue Zones Solution: Eating and Living Like the World’s Healthiest People, researcher Dan Buettner shares his story of meeting Francesca “Panchita” Castillo.  Castillo remains my favorite centenarian, of all those bio-ed by the Blue Zones research team.

“When I first met [Castillo],” writes Buettner, “she was standing in her front yard, wearing a frilly pink carnival dress and swinging a four-foot-long machete.  With vigorous, violent blows, the 99-years-old beat back the branches and low-lying bush of the encroaching jungle – the equivalent of my mowing the lawn back in Minneapolis…She didn’t know me, or my business, yet when I reached her, she took my hand in both of hers, looked up at me…and unleashed a whoop of joy.”

First Peoples First Crops – The Science Behind the Three Sisters

1.Examine corn and remove any stones hiding among the kernels.

2. In medium pot, simmer corn, water and lime over medium heat for ~1 hour.

4. Remove pot from heat, cover and leave to soak at room temperature overnight. 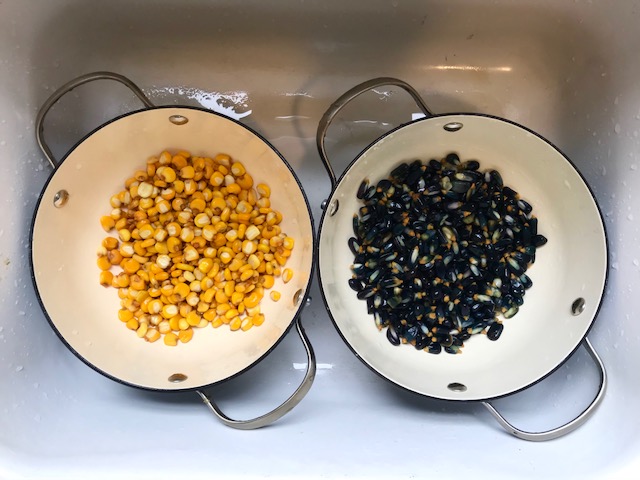 5. Drain and rinse corn in colander under running water, vigorously rubbing kernels between hands to remove most of the bran.

6. Using a champion juicer or food processor, process the corn, adding small amounts of water as needed to help the corn break down.  The pureed masa dough should have the consistency of a thick smooth hummus.

8. Cut the squash carefully in half, and remove the seeds with a metal spoon.

9. Slice the squash and arrange on a baking sheet.

10. Bake at 400F until lightly browned and fork tender, ~15 minutes.  (Or add to sliced squash to beans for the last 30 minutes of cooking.)

12. Slice the avocado, and de-stem the cilantro leaves.

13. Divide corn masa into 8 balls of dough.  Press the dough balls into tortillas between the 2 circles cut from a plastic bag with a tortilla press, the bottom of an additional skillet or baking sheet.

14. Lightly brown (or dry) tortilla on both sides over medium heat in skillet.  Stack on platter, and continue to press and cook tortillas, until all are prepared.

15. Place tortilla(s) on a plate and top with black beans, squash, avocado, and optional cilantro and salsa.