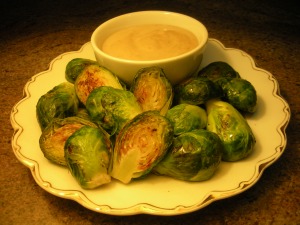 This week we’re taking on the brussels sprout.  Today at the farmers’ market in Joshua Tree, brussels sprouts abounded.  I decided to grab a big bag of brussels, and after picking up some of my favorite dressing for dipping at Joshua Tree Health Foods, headed home to make some delicious Caramelized Brussels Sprouts.

Brussels sprouts are far from the top of many people’s favorite food lists, let alone their children’s.  But, like most vegetables, how good brussels taste depends so much on how they’re prepared.  Instead of boiling them into oblivion, light steaming and then caramelization (a.k.a. browning) in a buttered skillet can yield a dish that will have one reaching for seconds.  Brussels are also great for dipping into one’s favorite creamy salad dressing (I love tahini dressing) or hoisin sauce.

Brussels sprouts are believed to have first been cultivated in ancient Rome. As early as the 13th century, the sprouts began being grown in Belgium (hence the name “Brussels” sprouts).   Production of Brussels sprouts in the United States began in the 18th century, when French settlers brought them to Louisiana.  Thomas Jefferson later grew them at his estate, Monticello.  Most of the United States production is now in California. 1

Brussels sprouts are an good source of vitamin C, as well as folate and fiber.  Brussels, as with all the brassicas, contain sulforaphane and indole-3-carbinol, phytochemicals believed to have anticancer properties. Research indicates boiling reduces the level of these anticancer compounds.  Steaming, and stir frying are recommended. 2, 3, 4

Recipe Variations: Brussels sprouts can be a canvas for many of one’s favorite flavors.  Customize this week’s recipe by throwing in some fresh minced garlic, nuts, pepper, and/or spices into the pan near the end of sautéing.

1.  Cut ends off of brussels sprouts and cut in half.

3.  Heat pan on medium heat and add salt, and brussels flat side down. 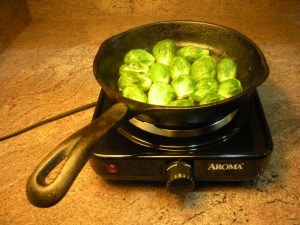 4.  Saute brussels until golden brown, turn and brown on the other side. 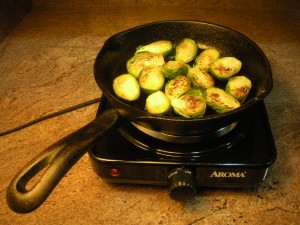 5.  Enjoy alone or dip in your favorite creamy plant-based dressing.