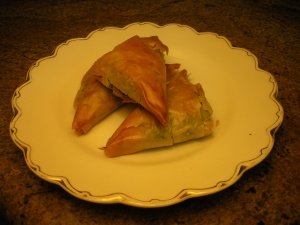 This week’s feature is the strongman of the vegetable world: Spinach!

Spinach is believed to have originated in ancient Persia (modern Iran) and the Middle East. Arab traders carried spinach into India, and then the plant was introduced to ancient China.

In AD 827, the Saracens introduced spinach to the Mediterranean, and arrived in Spain by the latter part of the 12th century, where the Arab agronomist Ibn al-‘Awwam called it the “captain of leafy greens.” 1

Then it moved to Europe and Great Britain, where  it quickly gained popularity because of its appearance in early spring, when other vegetables were scarce.

In 1533, Catherine de’ Medici became queen of France.  She fancied spinach so much she insisted it be served at every meal. To this day, dishes made with spinach are known as “Florentine”, reflecting Catherine’s birth in Florence.

During World War I, wine fortified with spinach juice was given to French soldiers weakened by hemorrhage. 2

Watch Popeye share the story of how he came to love spinach:
Popeye the Sailor Cartoon – Let’s Stalk Spinach

This week’s recipe is Spinach Spanakopita.  These warm triangles, crispy on the outside, creamy on the inside, are my favorite way to enjoy spinach.  A “healthy plate” in a pocket, spinach spanakopita contain vegetables, protein, and carbohydrate all in the palm of one’s hand.  Let your little one show you they’re as strong as Popeye squeezing the water out of the thawed spinach.  The filling can be made ahead of time and refrigerated up to 3 days until ready to assemble triangles.  Make a double batch, freeze the unbaked triangles up to 2 months, and pop in the oven for 10 additional minutes as desired.

1.  Thaw package of filo and spinach in refrigerator for 2 days.
2.  Squeeze water out of spinach with hands and/or strainer.

11.  Place one strip of filo on counter top, brush lightly with oil with pastry brush / fingers.

14.  Place ~2 tablespoons spinach mixture 1″ from end of filo strip.  Fold filo end over filling to form a triangle, then continue to fold up the strip in triangles, like folding up a flag.

15.  Continue folding up triangles, placing in a single layer on a baking sheet.
16.  Bake 20-25 minutes, until golden and crisp. 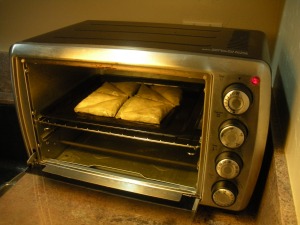 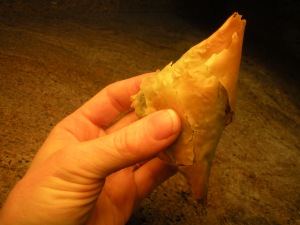