Peaches have yellow, white, and even red flesh, commonly with a velvety, “fuzzy” skin.  1

The nectarine is a kind of fuzz-less peach with a smooth skin.  Several genetic studies have concluded nectarines are created due to a recessive gene, whereas a fuzzy peach skin is dominant.  2

Important historical peach-producing areas are China, Korea, Iran, France, Italy, Spain and Greece.  More recently, California, South Carolina, and Georgia in the US have become large peach producers, as well as regions of Canada and Australia.  Georgia is known as the “Peach State” and has become a kind of peach “mecca.”  It holds an annual peach festival, serving up the world’s largest peach cobbler.

In Korea, peaches are considered one of the ten immortal plants and animals.  They are believed to symbolize happiness, wealth and longevity.  Peaches and peach trees are believed to chase away spirits.

The peach is native to China, where it has been cultivated as early as 2000 BC.  Peaches were a favorite fruit of kings and emperors.  4 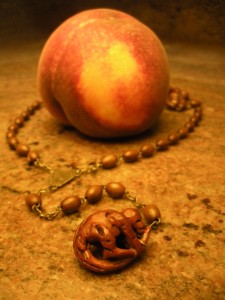 The Legend of the Monkey King

Wu Cheng’en’s classic Chinese novel, “The Journey to the West” opens with the story of a Monkey King, in which peaches play an important role in his path away from greed and dishonesty toward enlightenment.  Below is my synopsis of its Waley translation:

Once upon a time, a monkey was born.  He was the smartest monkey of his tribe, and as he grew, so did his quest for strength and power.   Soon he became the Monkey King.  He could lift his 17,881 pound golden staff with ease.  He could travel 33,554 miles in one somersault. The Monkey King could transform into whatever animal or object he wished – he was however unable to transform his tail.

He was a mischievous monkey, and soon had drawn the attention of the gods.  The gods invited the Monkey King to join them in heaven to keep a watchful eye on him, where the monkey believed he would receive an honorable place as one of the gods. Instead, he was made their stable boy, the lowest job in heaven.  But it was when the gods threw a great royal banquet at the empress’s jade palace, and did not invite him, that the Monkey King rebelled and became immortal.

The jade palace was surrounded by a grove of peach trees.  The peaches on these trees ripened every three thousand years.  After one bite of one of these peaches, one became immortal, with great strength.  On the day of the banquet, the Monkey King persuaded the palace guardians to leave him alone in the peach grove so he could take a nap.  After they left, he instead climbed into the largest tree and gorged himself on the peaches of immortality and fled.

Upon discovering that he had stolen the peaches of immortality, the gods amassed their greatest warriors and captured the Monkey King.  As punishment, they locked him in a fiery magic cauldron, but when it was opened 49 days later, the Monkey King leaped out, stronger than ever.  Finally the gods appealed to the Buddha to help them.

The Buddha picked up the Monkey King and placed him on the great palm of his hand.  He made a bet with the Monkey King:  “If you can jump off of my hand, I will set you free,” he said.  The Monkey King took a great leap, flying over valleys and rivers and mountains, until nothing was visible except for five pillars.  He alighted on one of the pillars, and signed his name, believing he had bested the Buddha.  It was then that he realized the five “pillars” were really the Buddha’s fingers.  The Buddha then turned his hand into a mountain, with the Monkey King sealed inside, where he remained imprisoned for the next five centuries.

After the Monkey King was released from the mountain, he was given the task of accompanying the great monk and scholar,  Xuanzang,  on a journey to recover the sacred books of Buddhist wisdom from India.  These books were associated with attaining enlightenment.  Over the course of the journey, the Monkey King made the decision that he wanted to use his powers for good.  He volunteered to become Xuanzang’s disciple, or student.  Through out the monk’s epic journey, the Monkey King protected him from demons and bandits.  They encountered eighty-one tribulations before accomplishing their mission and returning safely to China.  There, the Monkey King was granted Buddhahood for his service.  5

Listen to “peachy” music while you cook:

Grunge-Pop Song, “Peaches” by Presidents of the USA

This week’s recipe is for Peach Crumble.  Fruit can be a healthful and delicious dessert  for our families.  Our crumble recipe lets peaches take center stage.  Made with whole grains, and low in sweetener, it’s a dessert that tastes sinful, but that one can feel good about.  Using naturally sweet, fully-ripened, soft peaches eliminates the need to sugar or pre-cook the peaches.  If one’s peaches aren’t fully ripe, and one can’t wait a moment longer to eat them, they can be poached in some peach/white grape juice or sautéed until soft, and then used in recipe below.

1 batch of Crumble Topping, above

1.  Mash crumble topping ingredients together in large bowl with fork. 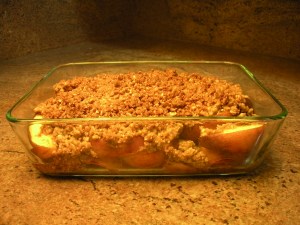 Storage:  Store cobbler leftovers in refrigerator up to 5 days.