The tomato is a round fruit which grows on vines, ripening mainly in the summer.

Tomatoes belong to the nightshade family.

They are most commonly red, but can also be green, yellow, orange, pink, black, brown, ivory, white, purple, striped, and can have fuzzy skin. 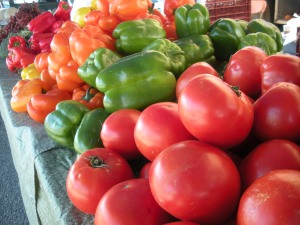 The Southwest native Americans are thought to have believed that those who witnessed the ingestion of tomato seeds were blessed with powers of divination.  2

When the Spanish colonized the Americas, they brought the tomato back to Europe and their various colonies.

In Britain, and certain areas of Italy, such as Florence, people were initially hesitant to eat the new fruit.  In Florence, the fruit was used solely as a tabletop decoration before it was incorporated into the local cuisine in the late 17th or early 18th century.

Poison!  Reportedly, one of the earliest cultivators in England was John Gerard, a barber-surgeon.  Gerard is said to have known the tomato was eaten in Spain and Italy.  Nonetheless, he believed it was poisonous.  Gerard’s views were influential, and the tomato was considered unfit for eating (though not necessarily poisonous) for many years in Britain and its North American colonies.

This week’s recipe is Tomato Bruschetta.  Bruschetta is an Italian antipasto or appetizer.  It is traditionally composed of slices of grilled bread, rubbed with garlic, and drizzled with olive oil.   They are often topped with tomatoes and herbs, or prosciutto.  This is a great dish for Fourth of July cookouts, as they can be made on a BBQ grill.  6

2.  Place bread on baking sheet and place under broiler. 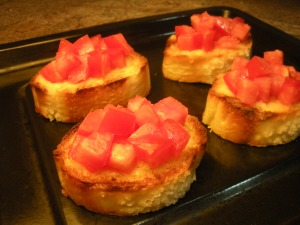 8.  Return to broiler until plant-cheese melts.

One thought on “Tomato Bruschetta”